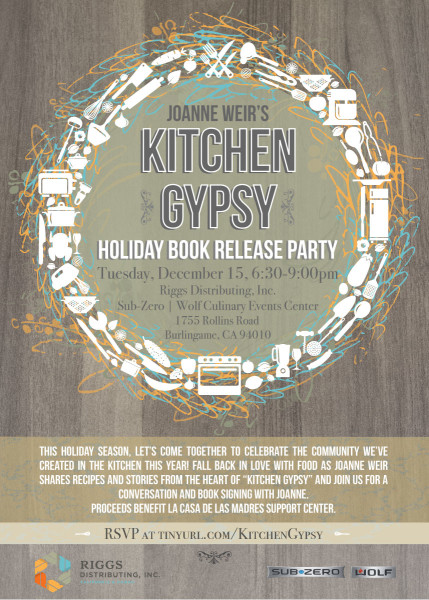 In anticipation of this event, we sat down with the “Kitchen Gypsy” herself, Joanne Weir, to get her perspective on Bay Area cuisine, writing cookbooks, and her goals as a chef and educator. 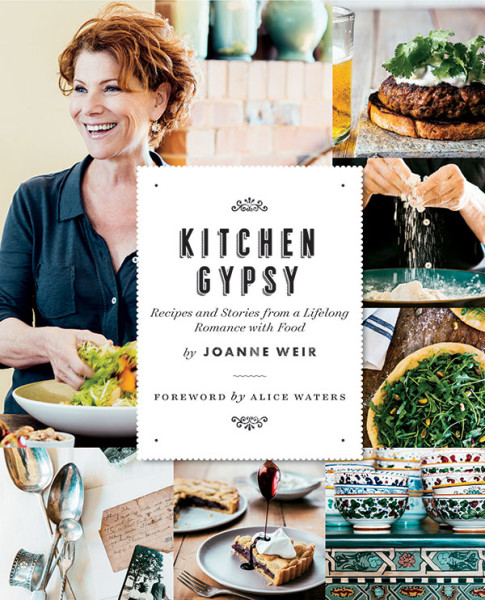 A 4th-generation professional cook, Joanne Weir spent 5 years cooking at Chez Panisse after receiving a Master Chef Diploma with Madeleine Kamman.  She is a James Beard award-winning cookbook author, cooking teacher, and host and Executive Producer for several award-winning PBS TV series, including her latest, “Joanne Weir Gets Fresh.”  Joanne has written 18 cookbooks, most recently her food memoir Kitchen Gypsy:  Stories and Recipes from a Lifetime Romance with Food, which was published in September, 2015. 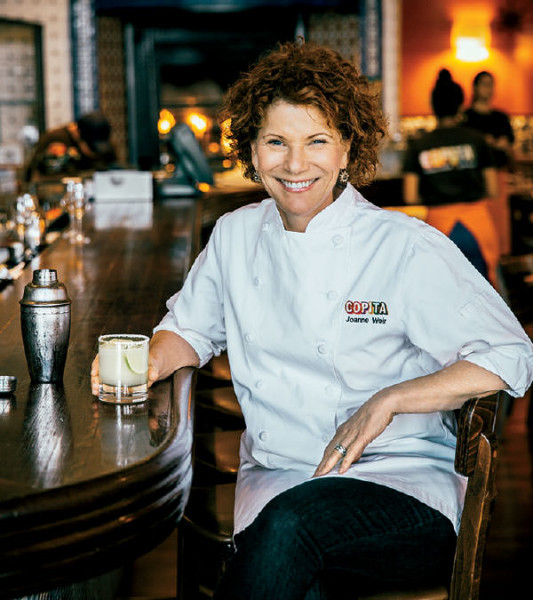 Joanne is co-owner of Copita, a tequileria & restaurant in Sausalito, California.  In 2012, she was also appointed by the State Department to the American Chef Corp, a select group of chefs chosen to promote world relations through food.  Joanne writes for several national publications, including Sunset Magazine, Cooking Light, Better Homes and Gardens, Fine Cooking and Food & Wine.  She travels and teaches extensively around the world as well as in her San Francisco studio kitchen.

Is it true the “Kitchen Gypsy” marks your 20th published cookbook? Congrats! How do the stories and recipes relate or contrast to the other cookbooks you have published?

Joanne Weir: This feels like the same kind of excitement as when I wrote my first cookbook, however, Kitchen Gypsy is so completely different. All of my other 17 cookbooks, including my first From Tapas to Meze, were recipe driven. This one is so much more than just recipes which is why we called it Kitchen Gypsy: Recipes and Stories from a Lifelong Romance with Food. It’s my personal journey.

“Kitchen Gypsy” feels as much a collection of memorable and influential stories from your life as well as a collection of stories.  How do the stories help a reader understand and appreciate the recipes that accompany them?

JW: I am a story teller and have always felt that the story is the way to bring the recipe alive. If you read the chapter called “There’s a Fly in my Wine” you will see that the fresh strawberry tart is all about the Chateau D’Yquem from 1892 that was served to me that day. 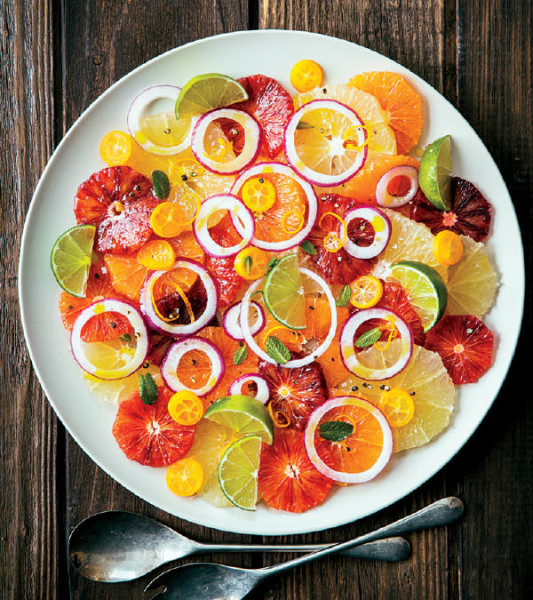 Tell us more about the range of recipes in “Kitchen Gypsy.” Near the beginning are recipes, like oatmeal cookies, that you learned from your mother, but soon, there are Spanish, French, and Mexican dishes.

JW: The recipes chronicle the years as I travel from childhood through college and post college years, studying cooking in France, traveling and cooking all over the world, cooking at Chez Panisse and the crazy, stressful opening of Copita, my first restaurant. That’s why it starts with the Lightning Cake my great Grandmother made, the Chicken Salad Sandwiches my grandfather made and served under the maple tree, and my mom’s famous Whoopie Pies and down-home Mississippi Mud.  As we travel through the years, my food develops and gets more sophisticated as I travel the world and uphold my nickname as the “wandering gypsy,” the name my father gave me when I was 6 years old.

In your autobiographical vignettes, you write with equal joy about your personal insecurities/culinary mistakes as you do with your incredible personal successes and most memorable experiences. How does this fit into your personal goals especially as it relates to cooking and culinary education?

JW: We all have ups and downs. I’ve gone through a lot and I wanted my readers to know that it hasn’t been a piece of cake. It’s like a camera taking a photo. Some of the pictures come out great and some are not so great. When I look at the ones that aren’t so great, I just set them aside, looked at the positives, took away the negatives and then took another shot!  I’ve been a very lucky person but it wasn’t just luck. I’ve worked hard and continue to do so.  I’ve sacrificed a lot and gained a lot in the process. I wouldn’t trade it for the world.

Do you have any particular favorite chapters or recipes from “Kitchen Gypsy?”

JW: I love them all really. It’s like saying do I prefer my mother or my father. I love them both but just in different ways. The chapter about my mom and grandmother will make you cry and the chapter about the fly in the wine will make you laugh. You will be anxious when you read the chapter called “The Grains of Salt” and you’ll want to beat me over the head when you read “Agave Girls.” When I wrote the epilogue, I finally understood my true nature and what drives me. The whole process of writing this book was very cathartic. When the final copy of the book arrived on my doorstep, I read it cover to cover. I’ve never in my life felt so proud of an accomplishment.

I understand that La Casa de las Madres, a Bay Area Support Services Organization in the Bay Area, is an important organization to you. Why did you decide to partner with La Casa for your Holiday Book Signing Event?

JW: Domestic violence has existed behind closed doors for too long.  I believe that as we begin to speak openly about this epidemic, the cycle of violence can and will end.  La Casa de las Madres provides immediate resources for victims and tools which enable them to survive and thrive, but it doesn’t stop there.  They are committed to educating the community and providing a clear vision on how we can all help put an end to domestic violence.

Do you have a favorite Joanne Weir recipe, cookbook, or television show? Let us know in the comments below!